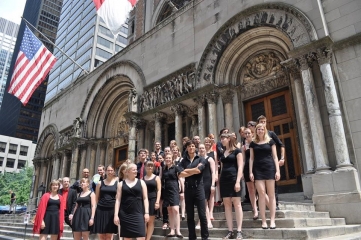 The Ghent University Choir (Gents Universitair Koor or GUK) was founded in 2000-2001 by a few university students who wanted to explore the world of choral music. At the end of 2001, Joris Derder joined the GUK as conductor and the road to success was open. Now, 15 years later, the choir consists of around 60 students and PhD students from a variety of faculties and backgrounds. The Ghent University Choir organizes a concert series each semester, but they are also often asked to perform at graduation ceremonies, academic reunions and congresses, as well as taking part in the Regional Choir Tournament. In February 2013, the GUK was promoted from the classification of ‘Uitmuntendheid’ (Excellence) tot ‘Uitmuntendheid met onderscheiding’ (Excellence cum laude). Each year, the GUK embarks on a concert tour abroad. In the past years, they have performed in Hungary, Denmark, Italy, the USA, … The GUK repertoire varies from early Renaissance polyphony to Baroque and romantic works to 20th century choir literature.

After general music theory, violin and piano courses, Joris took singing classes, as a baritone, first with Rita Piron, later on with Ludwig van Gijsegem, Bernadette Degelin and Lucienne Van Dijck at the Royal Music Academy of Antwerp. Since 2005 Joris has been a baritone with the Flemish Radio Choir, led by chief conductor Hervé Niquet. In this choir he has also performed as a soloist in works by Bo Holten and Johan Dujick, and participated in many cd, radio and tv recordings. As a soloist, Joris has sung in many European countries, as well as in New York and South-Korea in cooperation with a number of other ensembles, bringing a varied repertoire, ranging from Renaissance to contemporary music and newly created works. He has worked with Collegium Vocale Gent conducted by Philippe Herreweghe, Bo Holten, Kurt Bikkembergs, Jos Van Immerseel, Timo Nuoranne, Marcus Creed, Kaspars Putnins, Paul Hillier, Mariss Jansons and numerous other conductors. He has also experience in opera: Zuniga in the opera Carmen by G. Bizet in Leiden (Netherlands), Orfeo in Orfeo by F. Bertoni, Hans (Hansel) in Grietje de Heks (Gretel the Witch), a children’s opera with the music by Filip Martens. Next to being a professional baritone, Joris has also worked as a conductor. He took Kurt Thomas Master classes for Choir and Orchestra conducting in Utrecht, where he worked with several conductors including Daan Admiraal, Jos Van Veldhoven and Daniel Reuss. He was given the honour of conducting the Wiener Kammerchor. Since 2000 he has been artistic director of the University choir of Ghent. In August 2010 a new ambitious chamber choir was founded, named Koriolis. Joris is their artistic director.