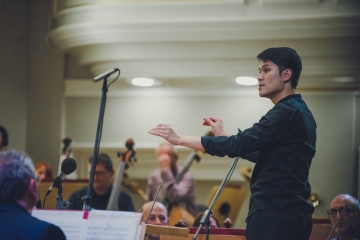 The Hong Kong International Christian Quality Music Secondary and Primary School Orchestra was founded in 2012. The School Orchestra is committed to provide young musicians with the opportunity to work with each other in an ensemble or chamber group setting to sharpen their musical skills and knowledge as well as broaden their performance techniques and stage presence, also to deepen and enrich students’ learning, character development and a sense of community volunteerism to spread love and kindness through music. Under the guidance conductor Mr. Adrian Sit, the School Orchestra has been taking part in the school's Christmas Eve Concert, Open Days, Annual Concerts and Anniversary Concerts. The School Orchestra has also participated in the string orchestra category of the 71st Hong Kong School Music Festival (2019).

Adrian SIT is an active conductor from Hong Kong. He is the 1st prize winner of the International Conducting Competition Augburg in 2016 and has been awarded the Hugh S. Roberton Prize for Orchestral Conducting. He started learning French Horn and piano by the age of 7. After obtaining his Bachelor of Art (Music) at the Hong Kong Baptist University, he moved to Glasgow to pursue a Conducting Master’s degree at the Royal Conservatoire of Scotland under the guidance of Garry Walker and Alasdair Mitchell. Meanwhile, he was under the tutelage of world-class conductors – Christian Kluxen, Jean-Claude Picard, Christopher Seaman, David Danzmayr, Martyn Brabbins, Jessica Cottis and Robin Ticciati. During his time in Glasgow, SIT, with his expertise and talents in conducting, conducted and cooperated with professional orchestras in Scotland, including the BBC Scottish Symphony Orchestra, the Royal Scottish National Orchestra and the Scottish Chamber Orchestra. Since 2015, he has also been the conductor of St James Orchestra which gives public performance regularly. In July, he is one of the three conductors chosen to make an appearance in London Sinfonietta Academy 2016 and studied with Diego Masson. He was also one of the very few invited to take part in the 2015 St. Magnus Festival Conductor’s Course led by well known conductors Sian Edwards as course director and Charles Peebles as associate director. In this course, SIT’s extraordinary conducting performance received favourable reviews among instructors and professional musicians. In 2016, SIT continued his studis in University Mozarteum Salzburg, Austria, where he finished his Post-Graduate Diploma under the guidance of Prof. Bruno Weil. During his time in Salzburg, he has the chance to cooperated with professional group including the Bad Reichenhall Orchestra, Österreichische Ensemble für Neue Musik, South Czech Philharmonic. SIT was also selected to conduct opera productions at University Mozarteum, such as Eugene Onegin and Orlando. Back to the time in Hong Kong, SIT’s outstanding leadership and conducting performances made him the only select one to be the first student conductor of the Hong Kong Baptist University Percussion Ensemble, and the assistant conductor of both the HKBU Brass Ensemble.