The Komen Wind Orchestra was formed in 1996 as a local band the by Leander Pegan, head of the Sežana Music School. The about 40 members of the orchestra are present or former students of the Music School in Komen. The ensemble performs original pieces as well as arrangements of various composers. The orchestra plays in numerous different events and takes part in a large number of concerts and competitions at home and abroad. In recent years, they were awarded the first prize in the fourth, third and second category at the National Wind Orchestra Competitions. The orchestra finished second at the International Competition Flicorno d'Oro in Riva del Garda, where they achieved also the award for the best compulsory piece performance. In 2004 they took part in the acclaimed London Wind Band Festival and finished second. The orchestra also organized a Brass Weekend, with workshops of the worldwide renown Steven Mead. The next year, the Komen Wind Orchestra had a performance at the Slovenian Philharmonic Hall in Ljubljana and was the Slovenian representative at the Mid Europe Festival in Schladming. In the season of their tenth anniversary they arranged a great number of workshops and concerts with the most distinguished and acclaimed Slovenian soloists and concert bands. The Komen wind orchestra won also the first prize in the second category at the Flicorno d'Oro competition in 2007. The year after they performed in Strassbourg at the Eolia International Competition and finished second, and in 2009 they were awarded with the first prize at the Summa Cum Laude Youth Festival n the famous Musikverein Hall in Vienna. In June 2011, the Komen Wind Orchestra took a step forward and won the second prize at the competition in the most well-known hall of the Berliner Philharmonic. In 2012 the ensamble welcomed the new conductor – Matija Tavčar, a young and promising local percussionist who has been a member of the orchestra since its very beginning. The Komen Wind Orchestra follows his new vision of music which will take the young enthusiastic musicians again all over the world. 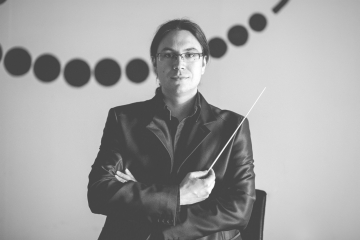 Matija Tavčar started his music career with professor Josip Mihelčič at the Music school in Koper. He continued studying percussions in Trieste at the “Conservatorio di musica Giuseppe Tartini” where he finished his Bachleor of Music degree with professors Giorgio Ziraldo and Fabian Perez Tedesco. In 2010, Tavčar acquired his Masters of Music degree with professor Cinzia Honorat. During his studies, Matija took part to many workshops, competitions, and has collaborated with various respected musicians, including Nebojša Jovan Živković, Ney Rossauro, Katarzyna Mycka, Dave Samuels, Saverio Tasca, and others. His pedagogic career started at the Music school in Koper. Tavčar in currently teaching at the Music school in Sežana and Komen where he conducts the School Music Band. He is a long time member of the Wind Band Komen, which he conducts from 2012. Tavčar’s education for conducting started n Slovenia with Simon Perčič, Miro Saje and Marko Somadossi. Since 2013 he has been improving his skills at the ISEB international school for conductors with professors such as Andrea Loss, Alex Schiling and Jose Pascual Viaplana. Matija Tavčar often attends international and local workshops of prestigious conductors (Felix Hauswirth, Miguel Etchegoncelay, Ivan Meylemans). Tavčar also founded the percussion group The Groover, mainly consisting of his students and percussionist from the area. For more about the orchestra and the conductor, as well as for more pictures and videos, please visit: www.pihalniorkesterkomen.si www.youtube.com/user/PihalniOrkesterKomen