Choir of Medical University of Bialystok

The Choir of the Medical University of Bialystok is one of the oldest university choirs in Poland. It was founded in 1951 by a group of students of medicine - music enthusiasts. It belongs to the category of mixed choirs and consists both of students of the Medical University and young doctors. The repertoire contains not only great oratorio works but also sacred and secular a cappella compositions ranging from the Renaissance to contemporary times, including some first performances. The Choir cooperates with the Bialystok Philharmonic Orchestra on a regular basis. For many years the Choir has taken part in numerous international festivals and competitions as well as in prestigious concerts both in Poland and abroad (e.g. Austria, Belgium, France, Germany, Greece, Great Britain, Hungary, the Netherlands, Ireland, Israel, Lithuania, Italy, Portugal, Spain, Slovakia). In 2013 Choir of the Medical University of Bialystok won the First Place in International Choir Festival VRATISLAVIA SACRA (Wroclaw, Poland) and was awarded with the Silver Diploma at the VII Rimini International Choral Competition (Rimini, Italy). In 2014 Choir of the Medical University of Bialystok was awarded with the Gold Diploma and won the First Place at the IV International Choral Competition “Kaunas Cantat” (Kaunas, Lithuania). 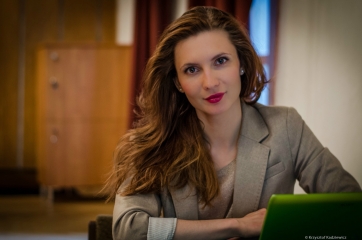 Anna Moniuszko graduated Artistic Education at the Academy of Music of Warsaw (branch in Białystok, Poland) and Postgraduate Choirmaster Studies at the Academy of Music of Bydgoszcz (graduated with honors). In 2003 she has started her professional experience at the Academy of Music of Warsaw (branch in Białystok) (now – The Fryderyk Chopin University of Music) as an assistant of the conducting class of professor Bożenna Sawicka and has taken up a role of assistant of conductor of the Choir of Medical Academy of Białystok (now – The Medical University of Białystok). In that time she achieved the 1st place on the International Choir Competition Canto Lodzensis (Łódź, Poland, 2007) and the 1st place and the Special Prize for the Best Conductor on the International Choir Festival in Preveza (Greece, 2008). In 2013, with her as a conductor the Choir won the 1st in the International Choir Festival Vratislavia Sacra (Wrocław, Poland) and the Silver Diploma in the International Choir Competition in Rimini (Italy). Anna Moniuszko cooperates with early music ensembles: Camerata Podlaska, Sine Nomine and Subtillior Ensemble. In 2005 she has established the Early Music Ensemble Diletto, which specializes in the renaissance and baroque music. She is a laureate of the Scholarship for Young Authors (2009) and the Scholarship for Professional Authors (2010) founded by the President of Białystok. In 2010 she defended her PhD thesis called Baroque opera composition in the aspect of contemporary performance practice by example of “Dido and Aeneas” by H. Purcell. She is the founder and a coordinator of university series of concerts Music of Baroque Masters, which present compositions of early compositors in historic interiors of Białystok. Nowadays, Anna Moniuszko works as a lecturer at The Fryderyk Chopin University of Music and as a conductor of the Choir of Medical University of Białystok.