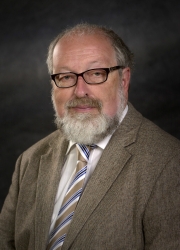 Ralf Eisenbeiß was born in 1952 in Zeulenroda/Germany. After his secondary school examination he studied pedagogy, German philology and musical education. He received his PhD in 1979 at the Pedagogical University of Zwickau. From 1978 to 1981, he studied choir and orchestra conducting at the Franz Liszt Conservatory in Weimar. Ralf Eisenbeiß was working as the director of the choral department at the Pedagogical University in Zwickau and appointed professor for choir conducting and choral singing in 1987. He was conductor of the renowned Pedagogical University Zwickau Choir. With his choir he performed a wide repertoire of compositions for a cappella choirs and with orchestra too. Under his direction the choir won numerous prizes at national and international choir competitions. Ralf Eisenbeiß was lecturer at the central seminar for choral conductors in Berlin and organised numerous workshops himself. He often appears as guest conductor at home and abroad, for example in Vancouver (Canada) and in Shaoxing University (China). He conducted different orchestras in Germany and abroad for instance in Austria, Latvia, Korea, China and Indonesia. Since more than 25 years he works as one the artistic directors of INTERKULTUR. He is the head of the artistic directors of INTERKULTUR. Ralf Eisenbeiß is founder of the International Robert Schumann Choir Competition in Zwickau and. He is one of the founders of the World Choir Games. Since 1992 he was responsible for about 120 international competitions of INTERKULTUR in Germany, Italy, Korea, Indonesia, China, Austria, Spain, USA and other countries. Ralf Eisenbeiß was very often invited as a juror in national and other international choir competitions all over the world (Germany, Great Britain, Netherlands, Ukraine, Russia, Indonesia).