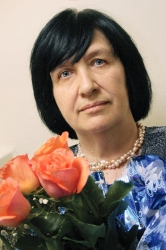 Laureate of International Festivals and Competitions, children choir “Radost” Tatiana Zhdanova, the president, artistic director and chief conductor of “Radost” graduated from the Moscow State Conservatory. She has been performing and conducting for 45 years and her name is well known in Russia as well as abroad. 27 years ago she founded a musical choir school “Radost”, and since then has toured with her choirs to over 30 countries of the world and 40 Russian towns, participating in choir competitions and musical choir festivals. Tatiana Zhdanova has been awarded the President’s Prize, Moscow City Administration Prize, twice has been a Laureate of “Grant of Moscow” competition. She is an Honored Music Worker of the All-Russian Musical Society; an Outstanding Worker in People’s Education; an assistant professor of Moscow State University of Education, a curator of the vocal-choir genre at The Moscow Committee of Education; the director of the Moscow International Children’s Choir Festival “Moscow Sounds”. This year 2006 she has been awarded the title Honored Artist. As a curator of vocal-choir genre in Moscow, Tatiana Zhdanova created a stable system of concert activities of the Moscow children choirs. She arranges vocal choir festivals, competitions, musical choir shows and parades, such as ones held during the festivals “Young Talents of Moscow”, “Christmas Carol”, “Easter festival”. For 20 years Tatiana Zhdanova has been an artistic director and a president of the International Children and Youth Choir Festival “Moscow Sounds”, which is directed to assist the international collaboration, revelation of cultural variety, development of friendly art contacts, mutual understanding and collaboration of young people from all over the world.