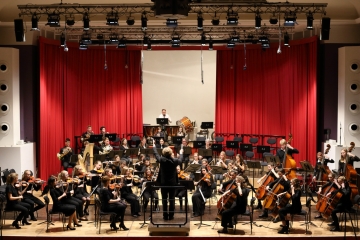 In 1993 Thomas Kalb was appointed General Music Director of the Heidelberg. Philharmonic Orchestra which made him the youngest ever Music Director of the Federal Republic of Germany. His extraordinary artistic and organisational abilities earned him two contract renewals in this position. As a guestconductor, Thomas Kalb has regular engagements with Symphony Orchestras and Opera Companies in international capitals such as Antwerp, Bayreuth, Berlin (Komische Oper), Birmingham, Bregenz (Festival Theatre), Bremen, Florence, Frankfurt am Main, Hamburg, Hanover, Luxemburg, Milan, Mexico City, Munich, Nuremberg, Schwetzingen, San Remo, Seoul and Tokyo. Furthermore, he also conducts numerous radio and television productions in Germany and abroad. Many premieres of both opera and concert strengthened his considerable reputation as a conductor of complicated and multi-layered scores. Thomas Kalb’s broad scope of activities has earned him many prizes and awards. After Thomas Kalb won the Conducting competition of the German Council for Music in 1987, nobody less than Sergiu Celibidache was so impressed by his artistic abilities that he had invited him to conduct the Munich Philharmonic on the occasion of the 1989 celebrations of the 40th Anniversary of the German Basic Law at Beethovenhalle Bonn.