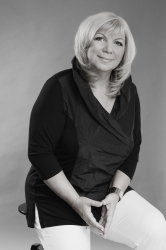 Pianist and choirmaster, Blanka Juhaňáková graduated from Janáček Academy of Musical Arts in Brno. In the years 1991-2001 she was the choirmaster of the Slovak Philharmonic Choir. She participated in the Boris Godunov project at the Salzburg Festival and in Japan, together with Claudio Abbado and prepared the Slovak Philharmonic Choir for the opera Rienzi by Wagner, with Zubin Mehta in Vienna State Opera House. She is a regular member and chairwoman of professional juries at choir festivals and competitions both home and abroad. In the years 2005 – 2014 she was the leading choirmaster of the Slovak Philharmonic Choir. The most interesting cooperation during this period were those with the most famous conductors like Pierre Boulez, Alain Lombard, Pinchas Steinberg, Ralf Weikert, Peter Eötvös, Christoph Campestrini, Marc Minkowsky, Pedro Halffter, Franz Welser–Möst, Bertrand de Billy etc. In April 2005 she made her successful debut in the Rudolfinum in Prague with the Prague Philharmonic Choir and with the Symphony Orchestra of the Czech Radio in Verdi`s Requiem. In November 2005 she was awarded the Fric Kafenda price by the Music Fund for outstanding interpretations home and abroad. In 2006 she appeared as a visiting choirmaster in the Slovak National Opera for the first time preparing operas: Puccini’s Turandot, Leoncavallo’s Comediants, Mascagni’s Cavalleria rusticana and Gounoud’s Faust and Margarete. Among the interesting projects of 2007 was the staging of Boris Godunov in Vienna State Opera House with Daniele Gatti and Sebastian Weigl conducting. With much success she prepared Rachmaninoff’s All-Night Vigil (Op. 37, Vespers) in Bratislava, Nitra, Paris, Palermo, Brno, Olomouc and in Prague. In 2012 she got the professor’s degree and was awarded a highly acclaimed ‘Crystal Wing Prize’ for the outstanding successes as a conductor and choirmaster on the international scene in 2011. Besides working on the Academy of Performing Arts in Bratislava, since 2014 she has been working at the Department of Composition, Conducting and Opera direction at Janáček Academy of Musical Arts in Brno.