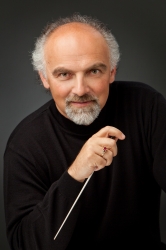 Richard Zielinski is known for his innovative programming and versatility as both an orchestral and choral conductor. A passionate and compelling communicator, with an extensive knowledge of classical and contemporary repertoire, a champion of new music, Zielinski has worked with numerous composers and regularly leads orchestras in performances of contemporary works. His professional vocal ensemble, the Richard Zielinski Singers, has recorded five CDs of music by many well-known contemporary composers. This summer the Zielinski Singers presented a series of concerts in the southern Poland, the Lower Silesian region with events in Krakow, Legnica, Dresden, Germany, Castle Ksiaz. As part of the Legnica Cantat 50, the Zielinski Singers will present a concert, AGE OF SINGER with stars, Katie Melua, Piotr Cugowski, Renata Przemyk, Kamil Bednarek and Polish choirs Proforma and Ronda. The choir will also join forces with the Legnica Filharmonic presenting the Poland Premiere of Richard Einhorn's VOICES OF LIFE with the Dreyer film, THE PASSION OF JOAN OF ARC. In 2018, Zielinski Singers received the Grand Prix award at the International Choral Song Festival in Międzyzdroje, Poland for their innovative and outstanding performances. Richard was also awarded Best Conductor of the Festival. Richard is in his twelfth year as artistic director of the Classical Music Festival and was the recipient of the Gold Medal of Achievement for his artistic achievements and musical contributions in Eisenstadt as principal conductor and artistic director of the Classical Music Festival. Zielinski serves as Director of Choral Activities with the School of Music at the University of Oklahoma and is the founder, music and artistic director for the Norman Philharmonic in Oklahoma. Zielinski continues to serve as Director of Music Ministries at McFarlin Memorial UMC, Norman, Oklahoma. His recent conducting engagements in Poland include the Filharmonia Gorzówska, Zielona Gora Filharmonic, Ołsztyn Filharmonia, and Akademia Sztuki Orchestra, in addition to working with Shenyang Conservatory Orchestra in China and the Joseph Haydn Conservatory Orchestra in Eisenstadt, Austria. Previous conducting engagements include the Master Chorale of Tampa Bay, Florida Orchestra, Tampa Bay Symphony Orchestra, Elgin Choral Union and Naples Philharmonic among others.