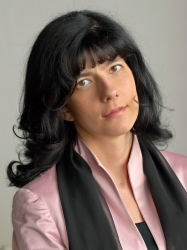 Urša Lah studied musical education at the Ljubljana Music Academy and choral conducting at the University in Tromsø (Norway). She perfected her conducting skills on educational seminars organised by choral associations IFCM and Europa Cantat. She was a member of some of Slovenia's best vocal ensembles and also a member of the professional Slovene Chamber Choir from 1992-1996. In the years 1993-2009 she was the conductor of the Mixed Youth Choir Veter (Jeunesses Musicales Ljubljana), with which she won many Gold Plaques and First Prizes at competitions in Slovenia and in Europe (Neerpelt, Budapest, Pohlheim, Lindenholzhausen, Preveza, Bratislava), several special prizes and "Best Conductor" awards. From 1998-2002 Urša Lah was also the chief conductor of the National Radio Chamber Choir with which she had several first performances of works by contemporary Slovenian composers, enriched the archive with recordings of works by Slovenian and foreign composers of the 20th century and prepared many vocal-instrumental projects. In the years 2002-2009 she was the chief conductor and artistic director of APZ Tone Tomšič University of Ljubljana. With the choir she won many First Prizes and Golden Plaques at national and prestigious international choral competitions (Tampere, Cantonigros, Maribor, C.A.Seghizzi in Gorizia, Varna, Olomouc) and many special prizes for her program choice and interpretations of contemporary works. At the International Competition in Varna 2007 she received the Best Conductor award. The highest achievement of the choir under the leadership of Urša Lah represents winning the final of the competition The European Grand Prix for Choral Singing in Debrecen, Hungary 2008. In 2006 Urša Lah co-founded the school for choral singers at the Glasbena Matica in Ljubljana and had led the school and taught Ensemble Singing there for three years. In recognition of her valuable work with choirs she received in 2008 the highest award of the Municipality of Ljubljana for cultural achievement - Župančičeva nagrada. In 2009, the Public Fund of Republic of Slovenia for Cultural Activities awarded her the award Gallusova Plaketa. Since autumn 2009 Urša Lah lives in Norway, where she conducts the Choir of Trondheim Symphony Orchestra, she teaches Ensemble leading and choral conducting at the Norwegian University of Science and Technology and works as a choir master for Trondheim Symphony Orchestra, Kristiansand Symphony Orchestra and Artic Philharmonic Orchestra. She is a lecturer in educational seminars for choral conductors, a frequent member of adjudicating panels at international choral and conducting competitions, a guest conductor of professional choirs and recognised ensembles and one of two artistic leaders of the international Utopia & Reality Chamber Choir.