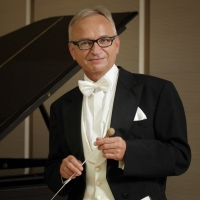 Benedykt Błoński was born in 1957. He is a graduate of the Fryderyk Chopin Academy of Music in Warsaw. He has worked with the Prof. W. Wawrzyczek Choir, currently, he is working with the choir of the University of Warmia and Mazury. With this choir he has participated in Polish and international competitions and festivals, winning a series of the highest prizes (gold medals, as well as Grand Prix). Since 2009, he has led the Choir CANTORES VARMIENSES for Warmia and Mazury Philharmonic. For his artistic and teaching activities he has been honoured with numerous prestigious Awards such as the Gold Cross of Merit, individual awards of the 1st degree of the Rector of the University of Warmia and Mazury in Olsztyn, and many others. His achievements include recording of 13 CDs. Benedykt Błoński has also conducted hundreds of concerts in Poland and abroad (e.g Greece, Ireland, United Kingdom, Belgium, France, the Vatican, Italy, Spain, Germany, Russia, Mexico, Argentina), performing Polish and foreign music, including premiere performances. He has held positions in artistic councils and juries of numerous choral competitions and festivals, both domestic and international. Benedykt Błoński has been an artistic director of international choral workshops “Eurochor 2001”, the artistic director of the Polish - German Choral Academy “In terra pax”, the artistic director of the F. Nowowiejski International Choir Festival. He is a member of the International Choir Olympic Council. He lectures at the Academy of Music in Bydgoszcz and the National Centre for Culture in Warsaw. Professor Błoński currently holds a position of the Dean in the Faculty of Arts of the University of Warmia and Mazury. In 1999 he was awarded the academic title of Professor of Musical Arts by the President of the Republic of Poland.