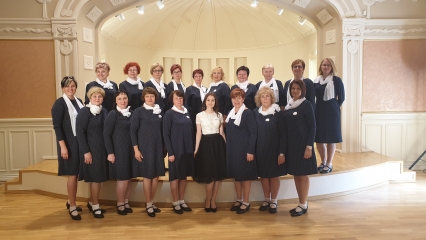 Choir's motto: Singer - Always Young! Beginning: The choir was formed in 1974, in Jonava furniture factory. Later, after the restoration of independence in Lithuania, the collective continued its activities at the Jonava Cultural Center. In celebration of the choir 's 25th birthday, it was given the name "Guoba". In 2014 "Guoba" event celebrated it's 40th birthday. Members: 24 women of all ages sing in the choir. Activities and Achievements: During its existence the choir was a participant of all republican, Kaunas song festivals and various choir festivals. It also participated in all Jonava, Palanga, Ginkūnai (Šiauliai district) choir festivals, performed in many Lithuanian cities and towns. It visited Prague, Poland, Latvia, Slovakia, Russia, Estonia and other European cities. The collective was awarded a second category on the artistic level. The repertoire consists of foreign and Lithuanian classical works, folk songs, sacred, Christmas, Easter hymns, etc. 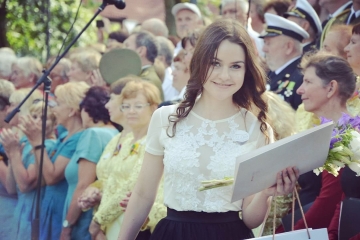 My name is Rūta Tiškevičiūtė. I am studying choir conducting in Vytautas Magnus University, Music academy, Lithuania. I have been singing and practicing in various choirs for many years. Now I lead a women‘s choir „Guoba“ .