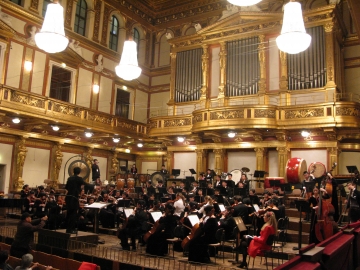 The Beijing Dongzhimen High School Orchestra was founded in 1989 and consists of non-professional students aged 12 to 18. Under the guidance of the famous Chinese conductors Delun Li, Xiaoyu Zheng, Xin Xu and Jie Niu, it rehearsed and performed nearly 100 Chinese or foreign famous compositions. In 2004, under the leadership of Xi Qin, the director teacher and permanent conductor of the orchestra, the Beijing Dongzhimen High School Orchestra was officially awarded the title of "Golden Sail orchestra", the highest artistic level evaluation in the area of Beijing student award by the Beijing municipal education commission. It has successfully held dozens of concerts at the National Grand Theatre, Beijing Concert Hall, and Beijing Zhongshan Concert Hall, and won several Gold Medals in Beijing and National Student Art Festival competitions, highly recognized by professionals internal and abroad. It recorded live concerts for cctv-9 international channel. It has participated in Paris Besancon International Music Festival in France and won the gold medal. It was invited to attend the "Vienna golden hall celebration concert of the 40th anniversary of china-Austria " and won the outstanding performance award in 2011. It participated in the Edinburgh international art festival in the UK and won the outstanding performance award in 2016. It has performed concerts together with the China National Symphony Orchestra and the China NCPA Orchestra. The mission of the orchestra is to cultivate and improve students' appreciation of music, playing skill, performance ability and comprehensive artistic accomplishment. It has trained hundreds of talents for dozens of famous universities (Tsinghua university, Peking University, Chinese university of Hong Kong, central conservatory of music, New England Conservatory of Music, Boston university, and Manhattan School of Music, USA) internal and abroad. 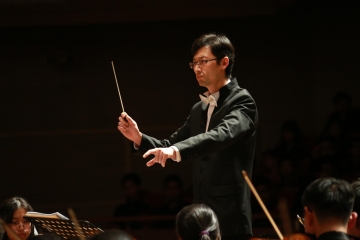 Qin xi graduated from Music College of Beijing Capital Normal University, majoring in theoretical music composition. He studied with the professional and systematic guidance of professor Feili Huang and professor Xin Xu, who are the founders, famous conductors and educators of Music College of Beijing Capital Normal University. He has been in charge of the management and conductor of Beijing dongzhimen high school orchestra since 2003 and led the orchestra to win the title of " Golden sail orchestra" awarded by Beijing municipal education commission in 2004. In 2010, on behalf of Beijing, he conducted orchestra to participate in the third national student art exhibition and won the first prize. In 2011, he played as conductor to help the orchestra attend ‘Vienna golden hall celebration concert of the 40th anniversary of china-Austria’ and the orchestra won the outstanding performance award, playing Wagner’s Overture do Die Meistersinger von Nuremberg and Bach’s Aria Sul G. He conducted the orchestra in the Edinburgh International Music Festival and won the outstanding performance award for Beethoven's fifth symphony and Weber's Oberon overture in 2016.