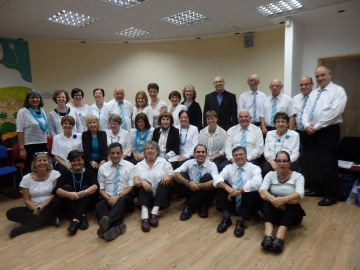 The Harmonia choir was founded in June 1993, and for 12 years was conducted by Anat Aharoni, a musician who imparted to the choir a very singular character, including in its repertoire Israeli music, songs about nature, love songs, and other songs that are special and rare. For the past 15 years, since 2004, Shai ben Jacob has been the choir’s conductor. He has continued in the direction initiated by Anat Aharoni, and has added additional elements such as Hebrew sacred music, classical music and American jazz. The Harmonia choir travels extensively all over Israel, and performs at choir gatherings and festivals, local and international. Bournemouth, in the South of England; Alta Pusteria, Italy, Hungary. Greece (Karpenissi) and Sochi, Russia In addition, we have had a number of independent performances of our own. Our choir comprises 32 singers, who live in Jerusalem and its surrounding neighborhoods.

The choir’s conductor, Shai ben Jacob, graduated from the Jerusalem Academy of Music and Dance, and has a degree in music education. During the past 21 years he has conducted several choirs, and for 27 years has been writing music for over 110 plays and musicals. He has written musical arrangements for several musical ensembles, and has himself performed in a variety of musical and theatrical events.