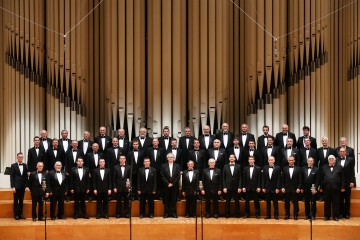 The Choir of Slovak Teachers (CHST) belongs to the best amateur male choirs in Slovakia. It was created by Ministry of Education of Slovak Republic – since 1933 (CHST) based in Trenčianske Teplice. The Choir of Slovak Teachers was created in Trenčín on 3rd of March 1921. The first full-length concerts were in Nové Mesto nad Váhom on 10th of November and in Trenčín on 11th of November 1923. The creator of CHST was professor Miloš Rupperdt who conducted the choir from 1921 to 1943. He was really important Slovak music character. In the years 1943 – 1945, the composers Ján Cikker and Dezider Kadoš cooperated with the choir. The follower of Miloš Rupperdt was professor Ján Strelec (1945 – 1954). He was one of the main organisators of music education in Slovakia. He extended the choir about total expression and voice culture and because of that the choir got preconditions to realize more difficult works of classical and current vocal production. He extended the repertoary of choir mostly about compositions of Slovak music composers (F. Kafenda, A. Moyzes, E. Suchoň, etc.) The conductor´s relay was taken by his student and leader of composing section at Academy of performing Arts, prof. Dr. Juraj Haluzický in the years 1954 – 1977. He improved the intonation and rhytmical aspects of choir and also its interpretive level. He represented himself succesfully in Belgium, Denmark, Netherlands, Germany, Ukraine and Estonia. The most succesful was with choir in Langolen – Great Britain. From 1977 to 2001, the next developer of CHST tradition was a student of J. Haluzický and also his follower at Academy of Performing Arts, prof. P. Hradil. Under its responsibility the choir started to study more first-run compositions of composers from 20th century. In his performance he united tunefulness and intonation-rhytmical pregnancy of his ancestors. Throughout terms of prof. Hradil, the choir got important awards at home and abroad. He has performed almost in all states of Europe and he is in contact with many choirs to this day. Since January 2002, prof. Štefan Sedlický was assigned to be a conductor and a leader of CHST. By his arrival, the fifth important art period of choir has begun. 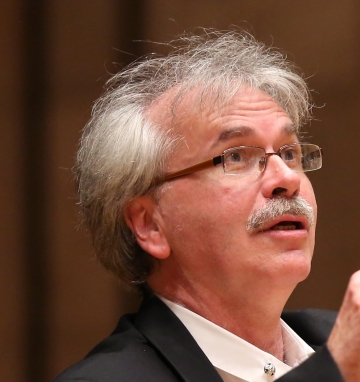 Prof. Mgr. Art. ŠTEFAN SEDLICKÝ, ArtD. (1963) He studied a piano at the Conservatory in Žilina. In the years 1985 – 1990 he continued studying of piano at the Academy of Performing Arts in Bratislava. He studied the choir´s conducting lead by prof. Peter Hradil, he finished in 1994. Since 1989 he is the conductor of Žilina Mixed Choir, with which he got the important international awards. The most important is the 1st prize in Spittal, Austria, in 1992; 2nd prize in Llangollen, Wales, in 1997, Palestriniho competition in Rome; absolute winner and the prize for an excellent conductor´s performance at Prague Choral Days in 2000. He cooperates with the State Chamber Orchestra in Žilina. He has conducted the mixed chamber choir Cantica in Martin (since 1994) and in the years 1998 – 2008 he was an art leader of Ján Cikker choir at University of Matej Bel in Banská Bystrica. In the area of choral conducting, he works as a university teacher at Faculty of Performing Arts at Art Academy in Banská Bystrica, he conducts the choir called Canzona Neosolium here. . Since 2002 he is the main conductor of the Choir of Slovak Teachers (CHST). Dramaturgy of the choir is mostly concentrated on actual choir production, which comes out from good personal art contacts with music composers at home and abroad. He conducted CHST at festivals and concerts in Czech Republich, Ukraine, Poland, Spain, Italy, Switzerland, Hungary, France and Latvia. In 2014, he won the gold medal in the 7th World Olympics of choirs in Latvian RIGE. The CHST recorded and studied the CD called „Hoj, zem drahá“ (national and hymnal choirs) according to Štefan Sedlický. It was edited by AP project Bratislava for Society of Martin Rázus in 2003. Ján Juráš was a producer, Ján Schultz was a dramaturge, Iľja Michalič realised audio-recording with music manager Ronald Šebest. The CD is coronation, where the base was scenic music to live scene of queen Mária´s coronation, a wife of Maximilián II, Lukáš Borzík who realised the choir in 2004 in Žilina and presented it in the Cathedral of Saint Martin in Bratislava by conducting of Štefan Sedlický and partnership of the Chamber Choir FÍLIA, members of the State Chamber Orchestra in Žilina and soloists S. Imrišková (soprano) and O. Odokienku (tenor). Recorded by VRÁNA Records Bratislava, it was edited by the Choir of Slovak Teacher based in Trenčianske Teplice. The Audio realization by Robert Čunderlík. The CD „A Current sacred production at the turn of Millenium“ (2011), where the base was a new choir production of domestic and foreign composers, which were recorded by Štefan Sedlický in the Church of Saint Barbora in Žilina. It was edited by CHST in cooperation with Music fund Bratislava and OZ SZSU. The audio realization and recording by Lukáš Borzík. SOZA R70 0002-2-231. The choir´s compositions of Ján Cikker for male choir by CHST are also parts of CD from 2012 „Ján Cikker – The Choir ´s production“, which was recorded by Štefan Sedlický and others choirs (Žilina Mixed Choir, Cantica collegium musicum, Canzona neosolium). It was an inspiration for CHST to record the compositions in folklore and folk theme. The CD was edited by MUSIC MASTER Jaroslav Stráňavský cooperated with the institution of Ján Cikker, Editor PhDr. Marianna Bárdiová, PhD. SOZA / MM 0134-2-131. The last monothematic CD in folklore theme is composed of compositions and dramaturgy of CHST and newly-formed compositions with folklore and folk theme for male choirs, which was composed and edited by Štefan Sedlický in the aula of the Faculty of Economy at University of Matej Bel in Banská Bystrica. The CD was edited by CHST based in Trenčianske Teplice cooperated with Music Fund Bratislava. The music production – J. Nižňanský. Some recordings for publicity were recorded from compositions of Christmas vocal production.