Fem@il Singers women's chorus was founded in 1949 as a workplace choir for the employees of the Finnish Post and Telecommunications. Since 2001 it has been open to all female singers in the Helsinki area. The choir is a member of Sulasol (Finnish Amateur Musicians' Association) and the Association of the Finnish Women's Choirs. The singers form a registered association, which functions in co-operation with the Institute of Adult Education in Helsinki. The choir's weekly rehearsals take place in Pakilakoti Nursing home, where the 28 singers also perform regularly, bringing joy to the residents, who often start singing along to the familiar tunes. The choir's repertoire ranges from Finnish folk songs, classical choral pieces and Christmas carols to African rhythms, schlager and pop songs.In addition to weekly rehearsals, Fem@il Singers organise two intensive voice training days each year. Two full-length concerts are produced yearly, one in the spring and one around Christmas time. The choir, and the smaller ensembles operating within the choir, also perform in choral music marathons, charity events and Christmas parties. Festivals in Finland and abroad (for example Bergen, Norway in 2010, Copenhagen, Denmark in 2012 and Verona, Italy in 2013) always belong to the most expected events. Since 2015, Fem@il Singers have been conducted by Laura Salovaara (MMus). To celebrate the 100th anniversary of Finland's independence in 2017, the choir focused on Finnish repertoire, which was performed in concerts, choral festivals, restaurants, nursing homes, shopping centres and even a service station. This repertoire is also the basis of what you will hear in Bratislava. 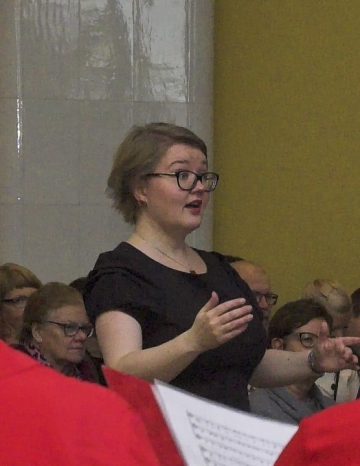