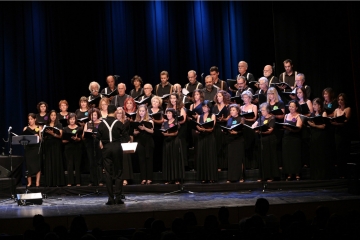 Camerata Vocal de Torres Vedras (Camerata) was born in 1982, in the city of Torres Vedras, and became a Cultural Association in 1985. Formed with, more or less, 40 elements, our choir interprets a diversified repertoire of times and styles. Camerata has performed hundreds of national and international presentations, taking part in choirs meetings, festivals (highlights for the "XV International Festival of Advent and Christmas Music in Prague", 2005, awarded with SILVER GRADE) and individually. From its repertoire, we emphasize the German Mass, of Franz Schubert; Choral Fantasy, by L. Beethoven, Op. 80; Spring Symphony, by Benjamin Britten, Op. 44; Requiem, by Gabriel Fauré, Op. 48; Ethno Mass for Peace, by Lorenz Maioerhofer and Missa Brevis Sancti Joannis de Deo, by Joseph Haydn. In 2012, Camerata began a new musical cycle, accompanied by a group of instrumentalists and soloists for the projects "Sacred Concert", by Duke Ellington; "Clap Yo 'Hands," by George Gershwin, "Around the World in 80 Compasses" and "Lights, CAMERAta, Action", performed in several concert venues of Portugal. Throughout its 35 years of existence, it has had only four artistic directors. It is directed, since 2000, by António Gonçalves. 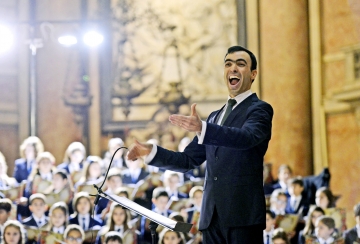 António Gonçalves was born in Lisbon in September 1975 and began studying music at the age of 10, at the Gregorian Institute of Lisbon. In 1995 he became a Choral Direction student at the University of Music in Lisbon (Escola Superior de Música de Lisboa ‐ ESML) where he graduated in 1999. In 2003 he graduated in Gregorian Chant under the supervision of Prof. Maria Helena Pires de Matos, at ESML. In 1995 he became a singer in the Lisbon Gregorian Choir (Coro Gregoriano de Lisboa ‐ CGL). Nowadays he is the president of CGL, as well as a singer and co‐conductor of that choir. In 1996 he founded the Children’s Choir of Sto. António dos Cavaleiros. With this group performed in several Portuguese cities as well as Barcelona (Spain) and Lyon (France). From 1997 to 2003 he conducted the Jubilate Choir and the Choir of Portugal Telecom. In 1998 he became a Choir teacher in Santa Cecília Music Academy (Academia de Música de Santa Cecília ‐ AMSC), in Lisbon, where he conducts the several choral groups of that school. In 2002 he founded the Ensemble Vocal of AMSC, a chamber choir that has premiered several compositions of Portuguese young composers but also performed baroque and classical works such as Dido and Aeneas, by Purcell, or several masses by Haydn and Mozart. In 2000 he became the conductor of Camerata Vocal de Torres Vedras. With this choir he explored several musical languages along the years. The choir presented all over Portugal, as well as in several European countries, concerts of Portuguese traditional music, sacred music, Jazz music, film music, world music and contemporary music. In 2001 he became a singer at the Gulbenkian Choir (Lisbon). In this professional choir had the chance to work with world class conductors such as Ton Koopman, Philippe Herreweghe, John Nelson, Lawrence Foster, Bertrand de Billy, Michel Corboz, Leonardo Garcia Alarcon and Gustavo Dudamel. With all these groups he has preformed all around Portugal and also in Spain, France, Belgium, Luxembourg, Netherlands, Italy, Switzerland, Austria, Slovenia, Czech Republic, Morocco and Japan, both as a conductor and a singer.