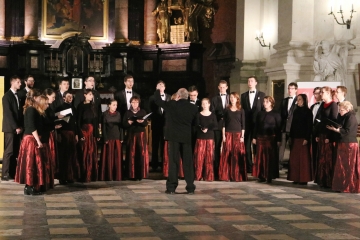 The Mixed Choir CANTICUM NOVUM started its existence thanks to the Polish Artistic Society Ars Musica and acts since September 1999. The founder and its artistic director is Leszek Kalina PhD. and members rank from among previous members of The Student's Choir Collegium Iuvenum. At present the choir has 60 members aged between 18-30 years. The famous voice pedagogy specialist prof. dr. Alojz Suchanek PhD. cooperates with the choir. The repertoire of the choir consists of polyphonic, classicist and romanticist works, arrangements of folklore songs and dance music, contemporary and experimental works – in a word the ensemble tries to create maximal genre variety and repertoire universality. The choir is the member of Musical and Choral Organization of Polish Choirs in the Těšín region, of The Association of Choirs and Orchestras in Warsaw and of the Union of the Czech Choirs. 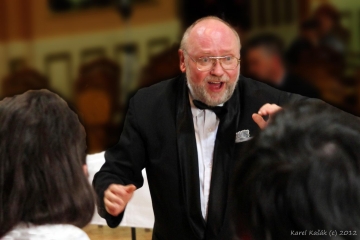 Dr. Leszek Kalina as born in Třinec, Czech Republic, in 1963. After graduating from the Polish Secondary School in Český Těšín he became a student of Music and Czech studies at the Pedagogical Faculty in Ostrava. During his degree he was particularly interested in choral music, ethnomusicology, musical history and the pedagogy of music. In 1986, at the beginning of his fourth year, he founded the Mixed Youth Choir Collegium Canticorum, which immediately became very well known, not only in the Těšín region. After graduating, he continued to perfect his theoretical knowledge regarding musicology and musical pedagogy and was awarded his PhD for his thesis “A Comparative Study of the Polish and Czech Systems of Musical Education” (1991). He took part in Professor Józef Bok’s seminars on the interpretation of choral music at the Warsaw Academy of Music five times. At the Polish Secondary School in Český Těšín, where he began working as a music teacher, he founded the student’s choir Collegium Iuvenum consisting of students from the school. In the genre of folk music he runs two highland bands: Zorómbek, also made up of secondary school students (founded 1989); and Sómsiek, made up of former students (founded 1995). He is also a founder and artistic director of the chamber choir Amici Cantionis Antiquae (founded 1992), the mixed choir Canticum Novum (founded 1999), and the vocal ensemble Alaudae (founded 2002). Apart from these activities he was also a member or artistic director of about 15 other musical or theatrical ensembles between 1980 and 1995. Leszek Kalina does not only take part in musical events in the Těšín region as the artistic director of his own ensembles. He was the artistic director of the Choral and Musical Association of Polish Choirs in the Czech Republic, which is a separate section of the Czech Choir Union and Polish Choir and Orchestra Association from 1991to 2003, and his been president since 2005. He was also the chairman of the Composer Department of the Literary and Artistic Association PZKO (1989-1993). At present he also works as a music education methodologist at the Pedagogical Centre for the Polish National Education in Český Těšín. After leaving the Collegium Canticorum Choir in 1999, he co-founded the Polish Artistic Society Ars Musica, where he works as artistic director. The aim of the Society is to support the culture (understood in a broad sense) of the Polish national minority in the Czech Republic. Since 1991 he has also been a member of the Alliance of Choir Conductors of the Musical Artist and Scientific Association in the Czech Republic, where he works as a regional consultant for conductors of mixed choirs. In 2006, he was granted membership of the Association of Concert Artists in the Czech Republic. From 2004 to 2009 he was the chairman of the Competition and International Festival Grant Awarding Committee of the Ministry of Culture of the Czech Republic. He often gives professional seminars, lectures and workshops at various choral and folk festivals and competitions, and conducts performances of combined choirs. He has also been the author, co-author or reviewer of several academic papers in the fields of musical pedagogy, musical history, philology, music education courebooks, choral and school songbooks and music education syllabuses. He has received several important distinctions, including: the President of Poland the Order of the Gold Cross of Merit (2015), the Highest Order of the Minister of Culture of the Polish Republic “Zasłużony dla Kultury Polskiej” (1996), the Medal of the Polish Ministry of National Education and Sport (2005), the Golden Order of Honour with a laurel leaf of the Polish Choir and Orchestra Association (2009), the Gold Badge the Czech Choirs Association, the Award of the Silver Brooch of the Consulate General of the Polish Republic in Ostrava (2001), the Stanisław Moniuszko International Award (2010) and the Prominent Pedagogical Personality Award from the commissioner of the Moravian and Silesian region (2002).