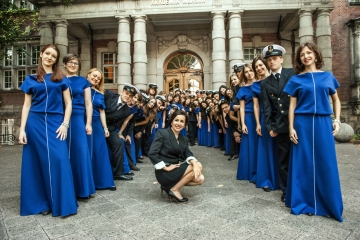 The Choir of the Maritime University of Szczecin was set up in February, 2003. It was created by Sylwia Fabiańczyk-Makuch, PhD, who is also the conductor and artistic director of the choir. The repertoire includes a vast variety of the sacred, oratorio and cantata, folk and popular music. The choir also performs maritime songs arranged for the ensemble by the prominent Polish composers such as Marek Jasiński or Romuald Twardowski. The choir holds numerous awards of choral festivals and competitions. The biggest ensembles' successes are: first prize at the most prestigious choral music festival in Poland “Legnica Cantat” (2013), first prize at the International Choral Festival in Ohrid, Macedonia (2013), first prize at the International Festival of Contemporary Choral Music “Canti veris Praga”, Czech Republic (2014), Grand Prix at the International Choir Festival in Kaunas, Lithuania (2015). The choir took part in numerous international festivals in Germany, Italy, France, Spain, Turkey, Macedonia, Czech Republic, Ecuador, Ireland, Lithuania and Malta. The ensemble has recorded two CDs with the maritime music (“Hail to the Seas”, “The Play of the Waves”) and “Under the Snow Cover”, a CD with Christmas carols from all over the world. 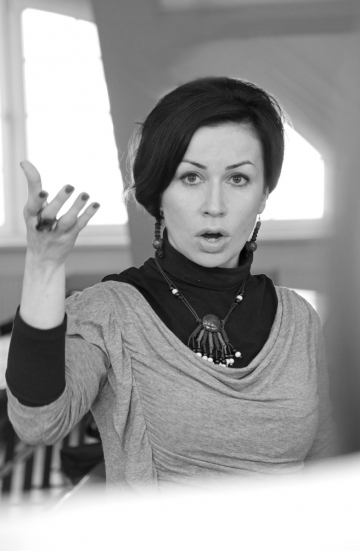 Sylwia Fabiańczyk-Makuch graduated with honours from I.J. Paderewski Music University in Poznań (branch in Szczecin) with the specialization in choir conducting under the supervision of prof. J. Szyrocki. She is also a graduate of the Postgraduate Studies for Choirmasters at the Feliks Nowowiejski Academy of Music in Bydgoszcz. In September 2011 she obtained her PhD degree at the Fryderyk Chopin Music University in Warsaw. She holds the titles of the best conductor at numerous choral festivals and competitions (Chełmno, Głogów, Prague). Decision of the Minister of Culture and National Heritage, Sylwia Fabiańczyk-Makuch was awarded the Medal of Honour “Merit for Polish Culture”. She was also awarded the Diploma of Honours for the Culture and Promotion of the West Pomerania, rector awards of the Maritime University and the Honour Golden Badge of the Polish Union of Choirs and Orchestras. She was awarded the medal of the Commission of National Education for outstanding contribution to education and upbringing. Sylwia Fabiańczyk-Makuch is employed at the Academy of Art in Szczecin as a teacher of choral conducting, scores reading and vocal ensembles leading methodology. She also holds a position of the artistic director of the Polish Union of Choirs and Orchestras, branch in Szczecin.