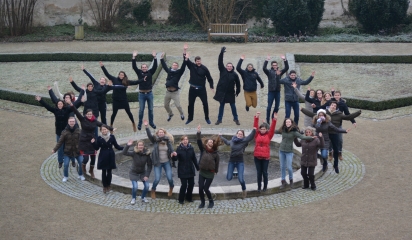 In 1982, the music teacher Felix Glombitza founded the Jugendkammerchor Ingolstadt (Youth Chamber Choir Ingolstadt), whereupon the young ensemble quickly gained attention because of its youthfulness and its high degree of professionalism. In the following years the choir did not only successfully participate in various competitions in Germany and abroad, but also in numerous broadcasting recordings. In 1990, the Jugendkammerchor won first place in the Youth category of the German Choir Competition. In the early days already, there was made a tradition out of traveling, which is the highlight of every season since: in 1985 the first concert tour took place. By now the Jugendkammerchor has travelled Europe extensively: from Norway to Spain, from Scotland to Hungary and everywhere in between. The music teacher Eva-Maria Atzerodt, who was a member of the choir since the beginning, inherited the job as conductor in 1990 and continued the successful path with the ensemble. The choir won a gold medal in the International Choir Competition in Riva del Garda in 1992 and first place in the Broadcasting Competition „Let the peoples sing“ in Vancouver, Canada, in the following year. In 1999, the Jugendkammerchor succeeded once again by winning the Erwitte Youth and Children Choir Competition. In addition, the Jugendkammerchor recorded several CDs over the years and delighted the audience and Ingolstadt and its surroundings with numerous a-cappella-concerts. Premieres, participation in competitions and presenting great orchestra compositions such as Haydn's „Die Schöpfung“ in 2005 or Puccini's „Messa di Gloria“ are part of the choir's everyday life. The last big project was the recording of the CD „Poesiealbum a cappella“ in 2012. After very successfully participating in the Bavarian Choir Competition in November of 2013 and a highly complimented concert in Ingolstadt in May of 2014, the Jugendkammerchor is happy to be travelling alongside the Danube, on which also its hometown of Ingolstadt is located, to Linz, Vienna and Bratislava on the annual concert tour. Currently there are 38 active members of the Jugendkammerchor, age 16 – 35, of which 24 are visiting Bratislava. 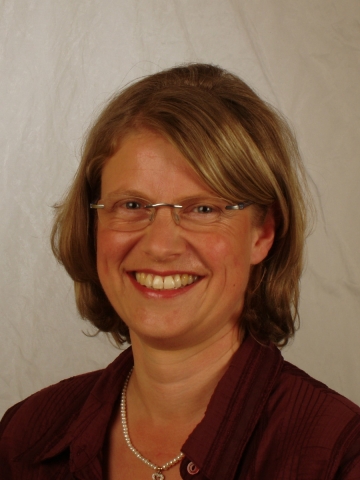 Eva-Maria Atzerodt was born 1968 in Ingolstadt. She was educated in playing the piano, violin, violoncello, contrabass and organ since she was six years old and has won numerous prizes in the competition „Jugend musiziert“. After her graduation she studied music with the piano as her main subject at the „Hochschule für Musik und Theater“ in Munich to become a teacher. She took various master courses with Prof. Klaus Schilde, Helmut Deutsch, Norman Shetler and Wolfram Rieger. She graduated from university in 1992 and worked in Munich and Augsburg. Since 1995, Eva-Maria Atzerodt is employed at Reuchlin-Gymnasium in Ingolstadt. She has always been dedicated to singing in choirs, so she was not only a member of the Jugendkammerchor Ingolstadt, but later also of the Madrigalchor and the renowned via-nova-chor in Munich. Eva-Maria Atzerodt conducts the Jugendkammerchor since 1990. In 1991, she founded the „Ingolstädter Nachtigallen“, a childrens choir that now has over 100 members, age 4 – 17. The chamber choir „incanto corale“, that is composed mainly by former Jugendkammerchor members, was established by her in 1996. Additionally she conducts the „Ingolstädter Motettenchor“ since 2013. Eva-Maria Atzerodt is chairwoman of „Konzertverein Ingolstadt“ and delegate for the school choirs in Bavaria. She is very involved in politics and has been a member of the Ingolstadt City Council since 1996.