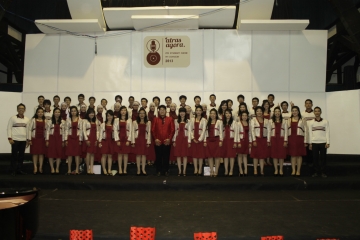 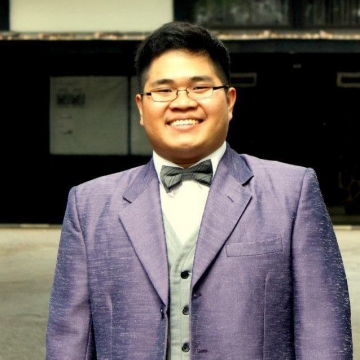 ADI NUGROHO—commonly called ‘Didut’— started to seriously learn about vocal and choral music when he was still a student at Parahyangan Catholic University (UNPAR), Bandung, Indonesia. With UNPAR Choir, he actively participated in numerous concerts and competitions in both Indonesia and abroad. He received his vocal trainings from Avip Priatna, Ivan Yohan, Dorcas Soenaryo, and Joseph Kristianto. He also actively participates in master classes, including vocal master classes with Bernard Putz from Austria. In order to broaden his conducting skill, he took a short course from Prof. Rob Vermeulen in Utrecht, The Netherlands. Didut has achieved many achievements in vocal music. Some of these achievement is 1st Place in the Male Senior 1 Category, and Best Interpretation of the works of Ananda Sukarlan in “Kompetisi Vokal Tingkat Nasional: Tembang Puitik Ananda Sukarlan 2011”. After that, together with the maestro, he took role in the world premiere of “Mendadak Kaya”, an opera by Ananda Sukarlan. Currently, he is trusted as the Music Director of The Singers Chamber Choir Bandung, Psalterio Singers GKI Pengadilan Bogor, and since 2012, he is also trusted to be the Music Director of ITB Student Choir. Under his direction, he managed to take these choirs to some achievements. In 2011, he led The Singers Chamber Choir to compete in the “50th Seghizzi International Choral Singing Competition” in Gorizia, Italy, and won the 3rd place in Monographic Programme 1900-present Category. In this competition, he is awarded as The Most Talented and Promising New Conductor.