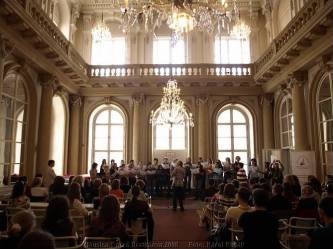 The monumental Renaissance palace rebuilt in Classicist style used to be the seat of Cardinal Jozef Batthyányi. The palace´s function is symbolized by a black cardinal´s hat that can be seen on the top of the roof.

In the past the palace witnessed many crucial moments of the country´s history, e.g. signing of the Peace of Bratislava after Napoleon´s victory at the Battle of Austerlitz.Today it houses a collection of royal paintings and precious tapestries with ancient Greek motives that were discovered by chance during the palace reconstruction.