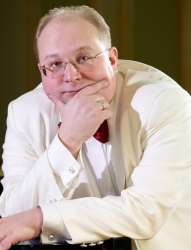 Composer, conductor, member of the Russia Composers Union, art director of the International Choral Art Festival «The Singing World», art director and conductor of the Women’s Choir at the Choir-Conducting Department of the St. Petersburg N. A. Rimsky-Korsakov Music College, professor of the Academic Choir at the faculty of the St. Petersburg Culture and Arts University and professor of the St. Petersburg State N. A. Rimsky-Korsakov Conservatoire. S. Ekimov is a graduate of the St. Petersburg State N. A. Rimsky-Korsakov Conservatoire, where he studied choir conducting (professor F. Kozlov) and composition (professor Yu. Falik). Post- graduate education was completed by him in 2011 at the class of professor V. Uspensky. During the period of 1993-2009 S. Ekimov directed the St. Petersburg Youth Choir. Among his compositions there are choral and orchestral ones, instrumentalv and vocal ensembles, ecclesiastic and secular music a cappella, vocal cycles, piano and choral pieces for children, music to performances, choral arrangements of Russian folk songs, popular melodies, romances. Ekimov’s opuses and transcriptions enjoyed popularity via Russia and all over the world: Latvia, Lithuania, Estonia, Ukraine, Belarus, Poland, Hungary, Austria, Germany, France, Spain, the Netherlands, Switzerland, USA and Japan. Choir music of the 20th-21st centuries was not once the topic of his master-classes. He was also the participant and chairman of the jury at different choral festivals and contests.