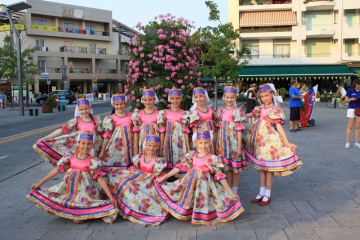 Since 1973, the creative team of Children's Folk Dance Ensemble, and now - the Municipal Children's Musical Theater "The idea," sparkles on of international and national competitions and festivals of children's creativity, being a multiple winner and the Grand Prix. In Soviet times, "Idea" was a hallmark of Kuibyshev. Enchanting dances and professional productions, which applauded not only in the USSR but also in many countries abroad favorably distinguished "ideas" from other creative collectives of our city. And today "The idea" has not lost its position. Many graduates of Samara "ideas" are among the most sought-after experts in the field of show business. Today MBUK "DMT" Idea "has more than 500 participants aged 4 to 17 years. All pupils from 1 to 11 are enrolled in specialized classes MOU school number 41, where, along with general disciplines studying classical, folk and modern dance, singing and acting skills. "Idea" is a big concert activities (200 concerts a year, including about 20 trips abroad), has a huge and diverse concert repertoire: about 100 dances, more than 150 vocal numbers. All performances are in scale, in every dance involving at least 16-20 children. During these years, was delivered 10 musical performances. Founder and managers is the Honored Worker of Culture of Russia, holder of the Order "Badge of Honor" Kolotovkin Elena G., chief choreographer - Honored Worker of Culture Kolotovkin Viktor. All teachers have extensive experience working with children and higher professional qualifications. DMT "Idea" is known far beyond the city of Samara. His mastery of the young actors managed to conquer the hearts of connoisseurs and art lovers living in Russia, CIS and non-CIS countries: Ukraine, Belarus, Estonia, Latvia, Poland, Germany, France, Italy, Bulgaria, Turkey, Greece, Spain, Egypt, Canada, Taiwan, Hungary, Austria, etc.